The Journey of a Volvo 480 Turbo

On occasion I have great opportunities to travel. In 2018, I had the fortune to be able to travel to Denmark. Once this was confirmed that I was actually going to go, the first thing the then boyfriend, now husband, said to me was “I should look for a car to buy and import.” Thus his search began.

For about a week he researched European cars when he realized the Volvo 480 Turbo would be eligible for import. He’s loved the 480 ever since seeing one during a visit to Germany a few years previous. 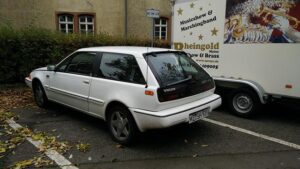 The next month or so was spent looking for some available to purchase in and around Denmark. I was occasionally shown these in glimpses on his phone, “ooh look at this one”. Then he found the one. I know he finds the thing he wants when he keeps showing it to me and then arguing with himself about whether he wants that one or another one or perhaps this other one or maybe not at all. No matter what he keeps going back to it. It got to the point where I told him I knew he was going to buy it. He wasn’t so sure and said maybe he’d go see it.  Side Note:  After he bought it someone wrote an article about this specific Volvo 480 Turbo, read it here: https://www.thetruthaboutcars.com/2018/04/rare-rides-volvo-480-doesnt-look-volvo/ 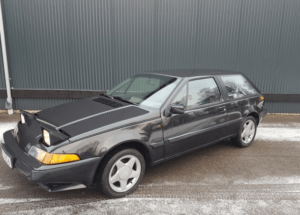 He contacted the owner, a used car dealer in Sweden, and asked to schedule a visit while we were in the area. They worked out a day and rough time for him to visit and check out the vehicle. We’d be there in May.

Starting his full day trek at about 0800 on a Tuesday with a delicious cup of coffee, husband dearest took a two hour train ride to Växjö, Sweden from Copenhagen. 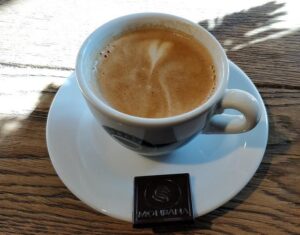 From the city center of Växjö he hopped on a bus to the industrial district and walked a few blocks to the dealer’s shop. Upon arriving he found the garage and rang the owner to be let in. Inside was a small variety of historic, rare, and interesting used European cars from makes like Austin, Renault, Saab, and of course Volvo! 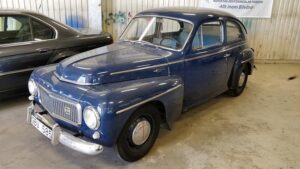 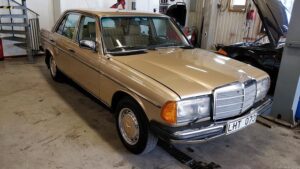 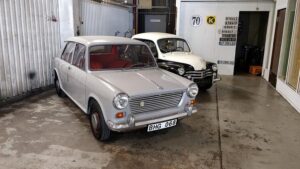 The dealer and his friend, who spoke better English and also was a musician, met him and showed him the car. The dealer’s friend accompanied him on the test drive and they struck up some good conversations about cars, travel, Europe, American politics, and especially music. The test drive went well and when they got back to the garage the dealer even offered to get the car up on the lift to give it a full inspection.

Everything checked out aside from normal wear and tear on interior and plastic trim pieces – nothing major. They were getting ready to have lunch and invited him to have lunch with them. We’re not sure if the lunch selection was made because he was an American or not, but they went out and grabbed some McDonald’s – a true international staple.

Returning from lunch, the formalities of the vehicle purchase began. The production date of the car was November 1993, so we’d have a few months before it could legally be imported to the USA via the DOT 25 year rule, but this didn’t seem to be an issue. A final price was agreed upon and storage was arranged with the dealer until we could determine shipping and delivery back to the USA. All in all the visit and purchase of the vehicle went really smoothly and it was a pleasure to meet such friendly and welcoming people in another country. Hubby even got a ride back to the train station from the dealer’s friend and then caught the train back to Denmark.

So How Do We Ship It?

Returning stateside saw the husband researching shipping options. For two months we looked at various shipping companies and received quotes of about six thousand dollars. It even got to one drastic point where we considered buying another car to fill a shipping container and get our money’s worth out of it so we could sell the second stateside to recover costs.

Exasperated with the soaring coasts and complete confusion around shipping companies, he made a Facebook post to one of the car groups he follows asking for some help. They all responded with one guy – the guy – that could do it, had done it for many in the community, and does it well.

Husband immediately jumped to email him. If the community recommends him he must be good. Sent him an email and got a response. Yes he was the guy and it would be no problem. Months of email exchanges back and forth, securing the logistics of pulling off this feat, each time asking for a price. As we got within a couple months of the “birthdate” of the Volvo, The Guy worked with us to move the car from Sweden to the Netherlands; the best exit out of Europe for the car and where The Guy was located. Still no price or money exchanged yet.

To arrange the pickup in Sweden the original dealer got added to the emails to further coordinate pick up of the 480 Turbo. The Guy asked if the car could be driven or should it be towed? Given the original low mileage (only 77,000km) and desire to keep it low, he opted for it to be trailered. They found it had a dead battery and asked if he wanted it to be replaced – incredibly helpful and friendly. Sure, just add it to the bill we haven’t seen. Still no price and the Volvo was on a trailer headed to the Netherlands. 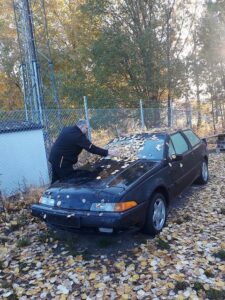 The Volvo Takes a Swim

Unloaded from the trailer, hubby gets the shipping information from The Guy. Then we get the price. You’ve probably thought this entire time that we’d be held hostage to a ridiculous price because now he has the car and can demand a ransom for it. As The Guy to import cars, he came recommended for a reason. Said and done the entire bill was half of what we were quoted by other shipping companies. Taking it a step further, almost a third of the bill was trailering the car from Sweden to the Netherlands. Doing this again, better planning could shave even more off the total shipping cost. The husband arranged payment, excited to not get raked over the coals and to not hear his wallet cry.

The Volvo was loaded onto the carrier and tracking began.

Stay tuned for another great adventure of a man, Car Girl, and the Volvo 480 Turbo!

There's a Volvo 480 Turbo taking up a parking spot! Part 1