I believe that a Lamborghini, or any exotic for that matter, should be loud and bright. I stand by that belief in my, very loud, very green, Lamborghini Gallardo. I’ve owned the Gallardo for about four months now and it’s amazing. It’s everything you’d expect it to be and more. It’s fantastic to drive, it’s looks incredible and gathers attention and people everywhere it goes. So let me share some things I’ve learned about owning a bright green Lamborghini.

Attention Everywhere
If you don’t like attention then stick to your Camry or mini van because this car has it in spades. My favorite story was after a mountain run with my buddies. It was the first time I had taken the Lamborghini out on any distance and I was still learning the car. We had stopped at this little country gas station, like we always do, to grab a drink and to stand around and chat a bit. Regular traffic was passing by and we hear a little boy scream “OH MY GOD!! IT’S A LAMBORGHINI!!!” from the open window of his Dad’s SUV. Everyone at the gas station heard it and started cracking up. The Dad turned around and pulled into the gas station where the little boy, probably 10 years old, and his two buddies got out in awe of the cars there. My friend Steve had his Ferrari there, we had a highly tuned GTi and three Tesla’s. The Dad asked if it was okay that they took pictures and of course we were all cool with it. Steve let the boys sit in his car and the Dad took pictures. They made their rounds with the Lamborghini and a few other cars. It was great to share the cars with future enthusiasts. We were all there at that same age. 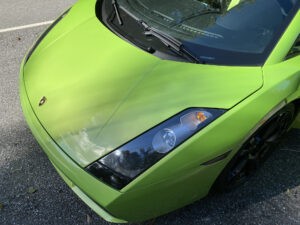 Otherwise, if I go into a store there is generally a person or two hovering around the car taking photos. At the gas station I usually get a walk up or two and I’ve been singled out inside a store by someone wanting to tell me they liked my car and saw me get out of it. I generally offer to open the car up and let people take a look and some inside photos. I’ll even let them sit in from time to time. It’s not a big deal but I know I appreciate it when people who have cars that I admire, talk to and share them with me.

It’s a Photo Magnet
Every single time I drive it people are snapping photos with their cell phones from their cars behind me, next to me and in my blind spot and believe me when I tell you that car has a huge blind spot. It draws crowds at gas stations, parking lots and in traffic. 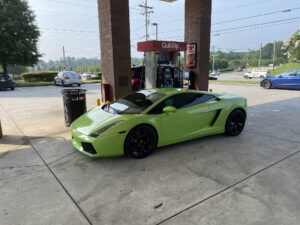 People are overly kind
To date, I have not had anyone say anything other than nice things to me about the car. I’ve had people ask me how fast I’ve had it, how much do I like it or just telling me they like the car. It’s been really cool to get acknowledgement from people about.

Car Enthusiasts are unified
Along the lines of people being kind, I generally get the thumbs up, hand waves, light flash etc. from other car enthusiasts in their cars. Something about the Lamborghini doesn’t feel like we are competing, it just feels like we all appreciate it other without bias. Really cool.

Motorcyclist Respect
Unlike any car I’ve ever driven, the Lamborghini gets respect from most everyone but amazingly enough from Motorcyclists. Motorcyclists are a special breed and a tight group. I’m not sure I’ve ever gotten even a head turn from one before, however in the Lamborghini it’s constant. I get the hands out, the head nods and seemingly general appreciation from our two wheeled brothers. Pretty cool if you ask me. 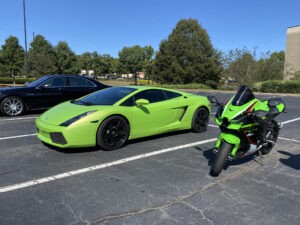 Old People Don’t Notice It
Yes, it’s invisible to anyone over about 50. Which is fine, but really? How can you not see or even look at a bright green car driving by no matter what it is?

Revved on by a select few
Okay maybe not everyone and maybe this is in slight contrast to the unified car enthusiasts, but it does happen. Today I was revved on by a 30 year old Toyota Corolla that looked like it hadn’t been wasn’t since the 1990’s. The guy even had to shift his automatic transmission into neutral to do it. Why? I also got revved on by a Harley rider. Um… Otherwise though, it’s a rare occasion. 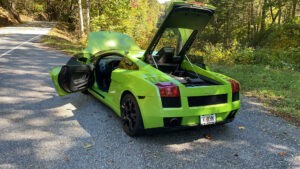 Overall though, the Lamborghini is an amazing experience all around. The sound, the feel, the speed! It’s long been a dream car of mine and I’m happy that I finally get to own one.

Look for a new video soon!

What I've learned from owning a Lamborghini, so far...